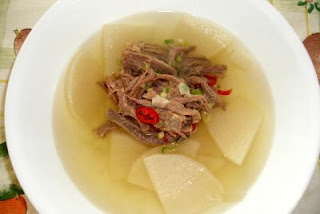 Korean radish soup is cheap and easy to make. Unlike most Korean soups, it's not spicy but has a mild flavor. It's a fairly light meal, but when your stomach is full of warm soup and rice... be careful.

The meat is boiled and transfered after 10 minutes to cook the blood on the surface and then discard it. This way the large stock pot with soup will not have little blood clots or foam on top.

I personally feel what makes or breaks this is getting the salt right. Too often people undersalt soup. I would pour 1/3 cup of salt into a bowl and pour 1/2 of it into the soup. Then add it slowly to taste. I like to make it a bit salty to bring out the flavor...I will post more about this later. Add as much pepper as you like.

A large stock pot will be adequate if it could hold 4 gallons. For reference, the drink coolers we use are 5 gallons. You may need to split this into 2 smaller pots. This will provide 2 cups per person (or half a nalgeen bottle).

[Alternate variations] You can add about 5 chopped green onions before serving. Another variation is to add a few cups of fish sauce, or about 20 dried anchovies to the water and strain them out at the end.

[Possible side dish] serve with rice.

Carmen said…
It's funny that I was looking for a moo gook recipe and this was on the first page of google search! muchas gracisa!
May 10, 2010 at 3:20 AM

Jen Tse said…
Thanks Tom! I was looking for a good soup recipe for house dinner. This looks great! Hope this will go well with spring rolls.