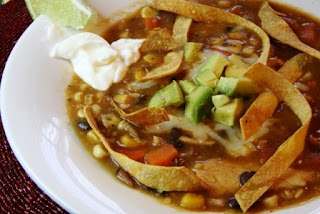 -Ask a helper to put on gloves and tear the meat away from the bones of both chickens. Discard the skin (too much saturated fat and your soup will be too oily).
-Chop the carrots, onions, potatoes and celery into soup-size pieces and place in a large stock pot.
-Empty the can of chili pepper and the bag of corn into the pot.
-Open the can of hominy and the cans of black beans. Drain both, then empty them into the pot.
-If the meat is off the chicken, put the meat into the pot too. Discard the bones (you can save the bones for chicken soup later, but you don’t want to put them in your pot right now unless you want to pick all of them out before you eat—too annoying)
-If you are using canned chicken broth, put it in now. Otherwise, fill the pot with water until it just covers all the stuff you have in the pot.
-Turn the heat on HIGH and cover.
-Open the can of tomatoes, but leave part of the lid attached. Drain the liquid from the can INTO your pot (the extra tomato flavor is nice).
-Cut the tomatoes into soup-size chunks and put them in the pot.
-The liquid in the pot should be hot now. Take a small amount of the liquid into a bowl and dissolve the bouillon into the liquid, one cube at a time. Then put it into the pot.
-Stir in the cans of condensed soup.
-Bring the soup to a boil, then reduce heat to simmer until you are ready to eat (I recommend boiling for at least 45 minutes)

Serve the soup with the following as garnish:
-Tortilla chips (each person crumbles a few on top of their bowl of soup)
-Sour cream
-Chopped avodcados
-chopped cilantro
Email Post

eileen said…
I'm a big fan of George's Chicken Tortilla Soup! He made it for our ministry group and everyone loved it! I think part of it is to make it with love and to taste.. at least that's what I saw George put into it (aw. seriously though). Would be especially great on a cold rainy day or after a snow fight at Sierra Lodge :)
July 10, 2010 at 10:18 AM

Dennis said…
Dang, if delicious can be liquefied and poured into a bowl, that's what you would get with George's Chicken Tortilla soup! Amazing!!! Or in Korean, "Amajing!"
October 7, 2010 at 1:04 PM